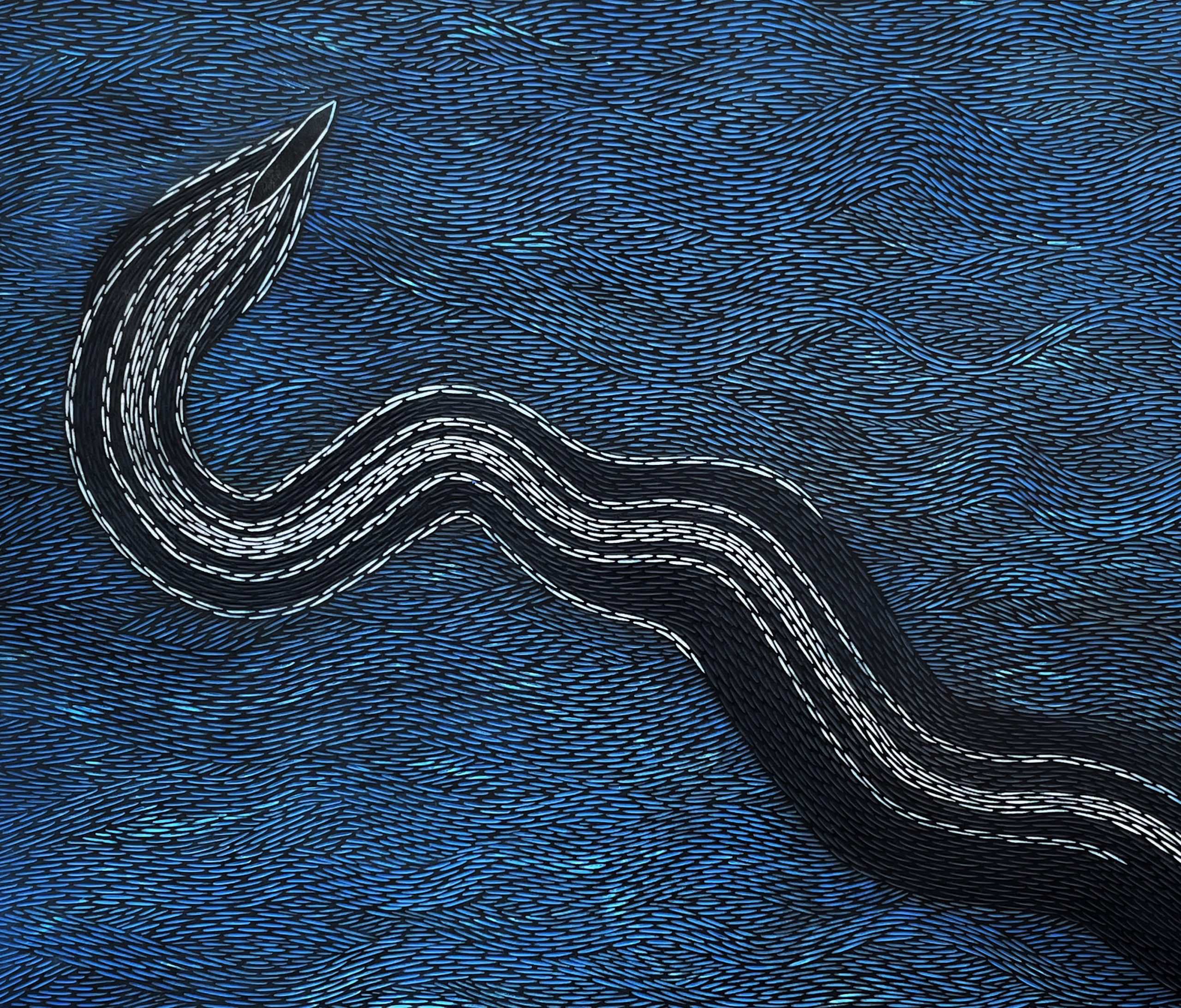 When I first proposed my collection ‘Ione Crystal Peries Lovatt – Her Journey’ for Design Nation’s exhibition ‘Our Journey’ at The Hub in Sleaford, I wanted to explore so many aspects of my mother’s life – her ethnicity, our relationship, her physical health, her mental health. I wanted to explore how moving from the vibrancy of Ceylon (now Sri Lanka) in the late 1960s to the grey  streets of Stoke on Trent might have affected her. I wanted to understand how a person with so many hopes and dreams for the future became weighed down by agoraphobia, strokes, disability and depression. 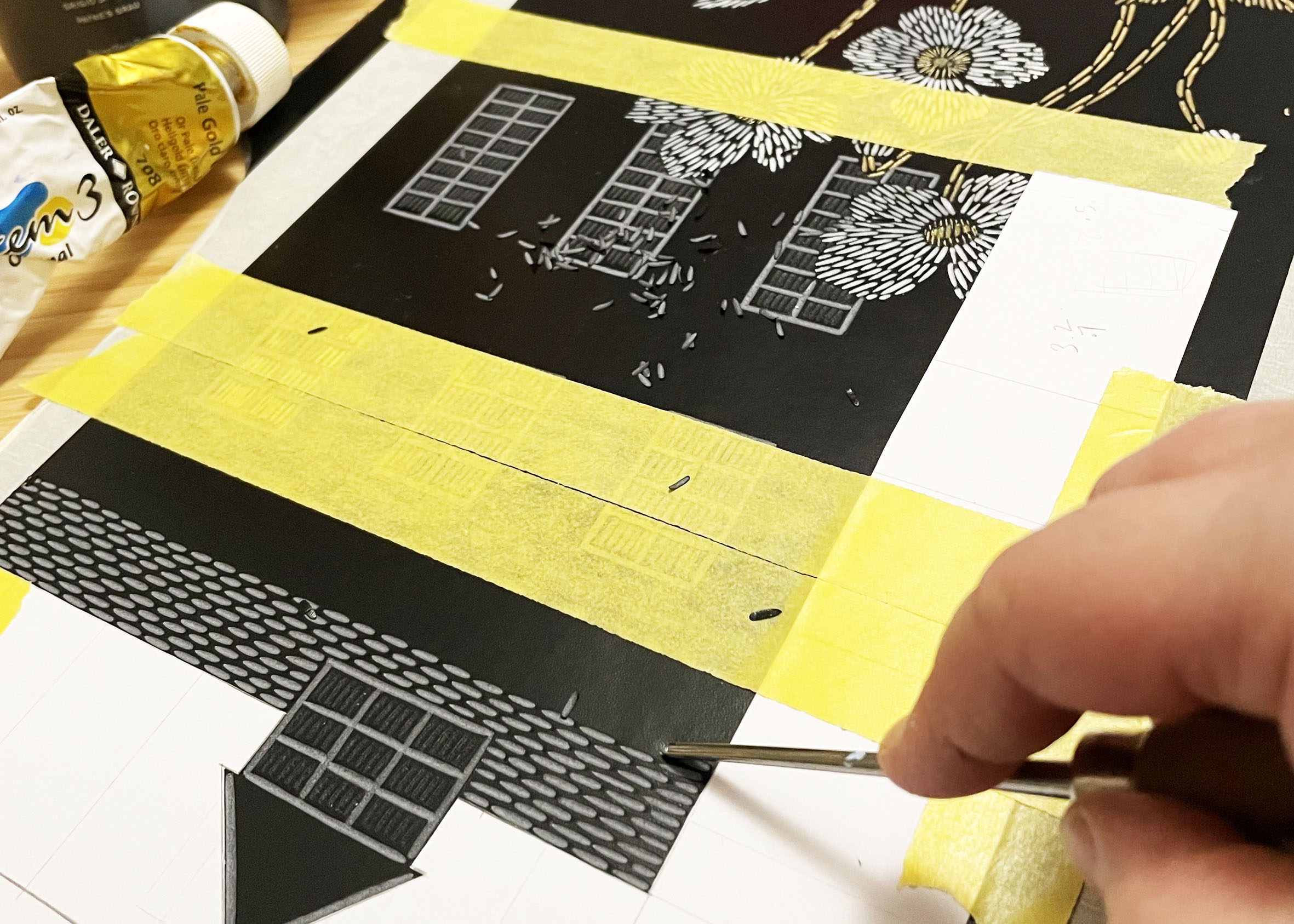 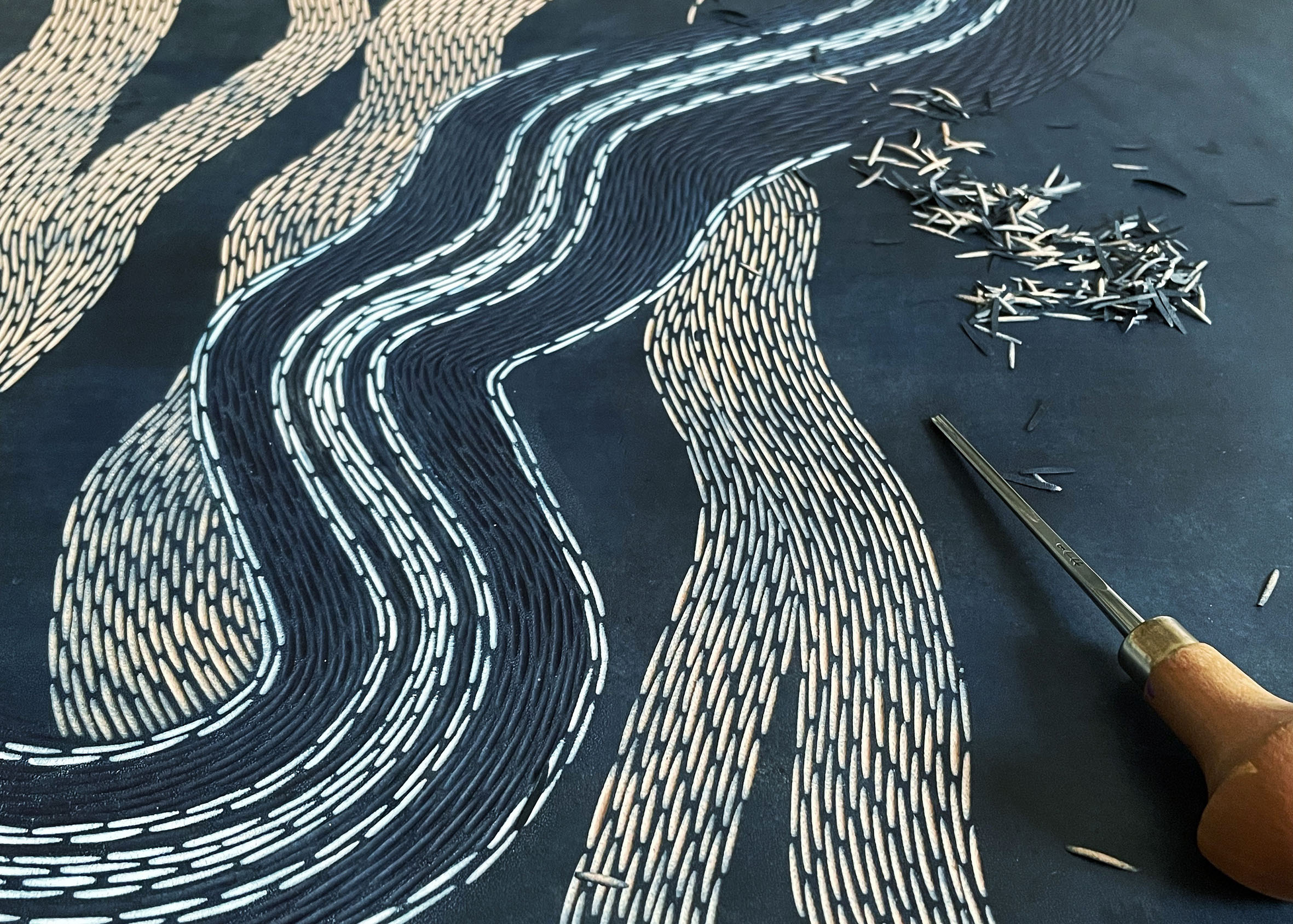 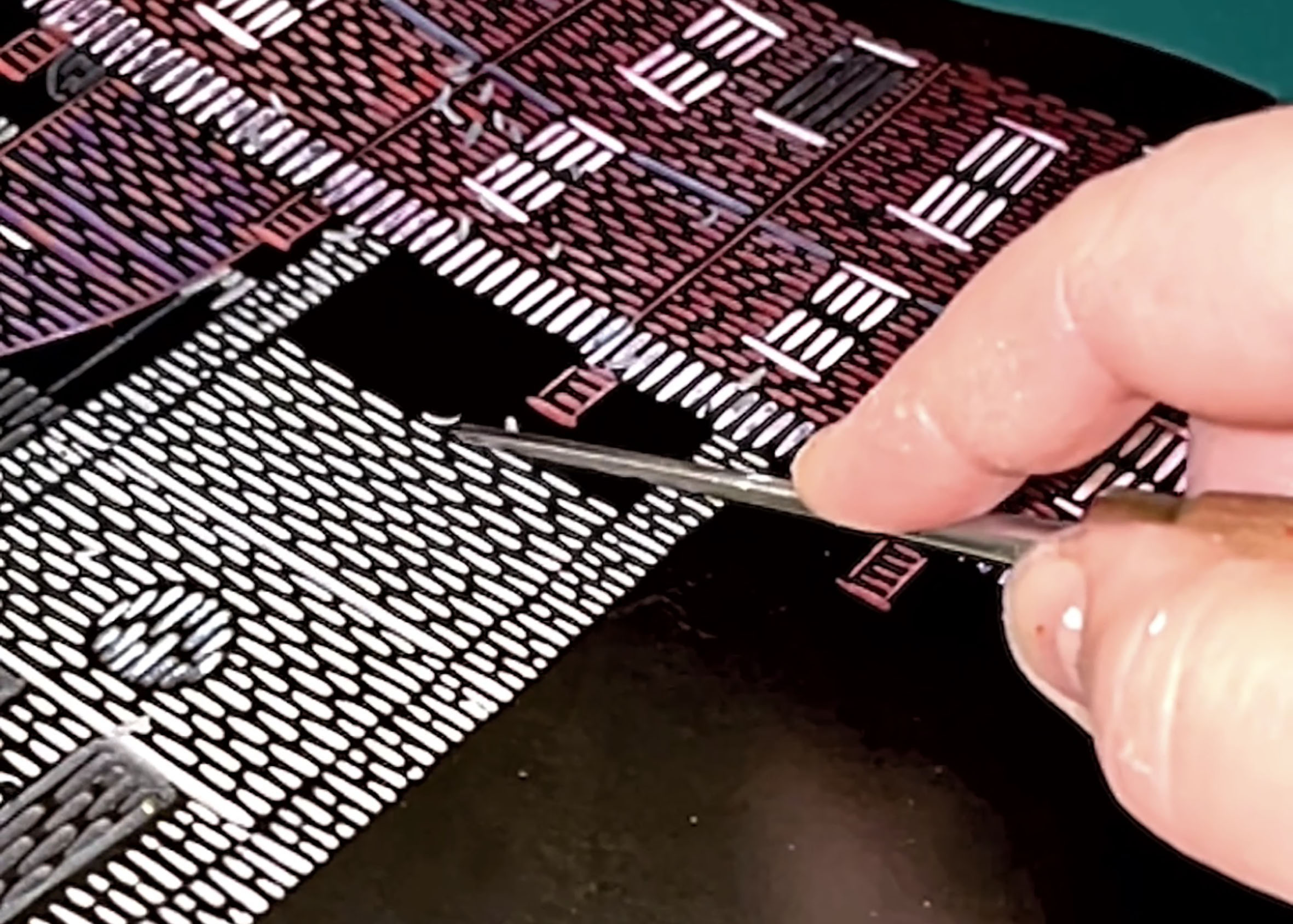 As I started to explore my mother’s life I realised that this was a big ask in one small collection of images and one that I could not fulfil. As the research and the thinking progressed, and looking back at the end of the making process, I realise that whilst I have attempted to tell my mother’s story it probably says as much about who I am as my mother. I quickly realised that my mother being Sri Lankan was not the part that interested me most, or really affected her life. Circumstance and health were the main defining characteristics that spoke to me. In many ways I feel that the work I have produced fails to tell the story of the person, but hopefully the snapshots I have created will speak to the viewer in some way and connect, telling stories that evoke an emotional response. This project proved both a challenging and cathartic experience but it was important to redress the balance as I have previously concentrated on my father’s story leaving my mother on the sidelines. 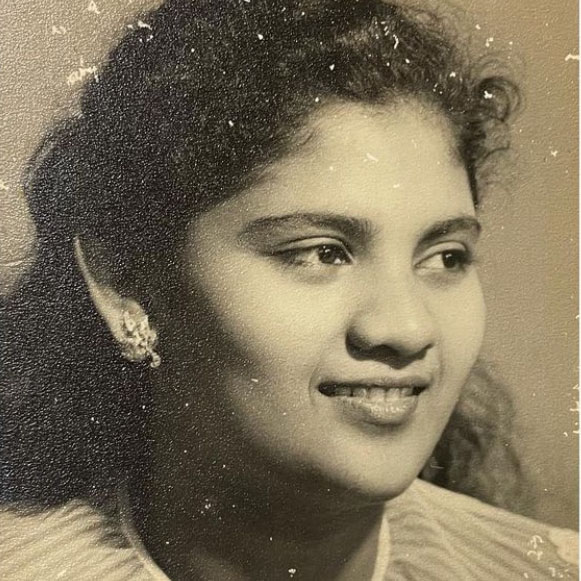 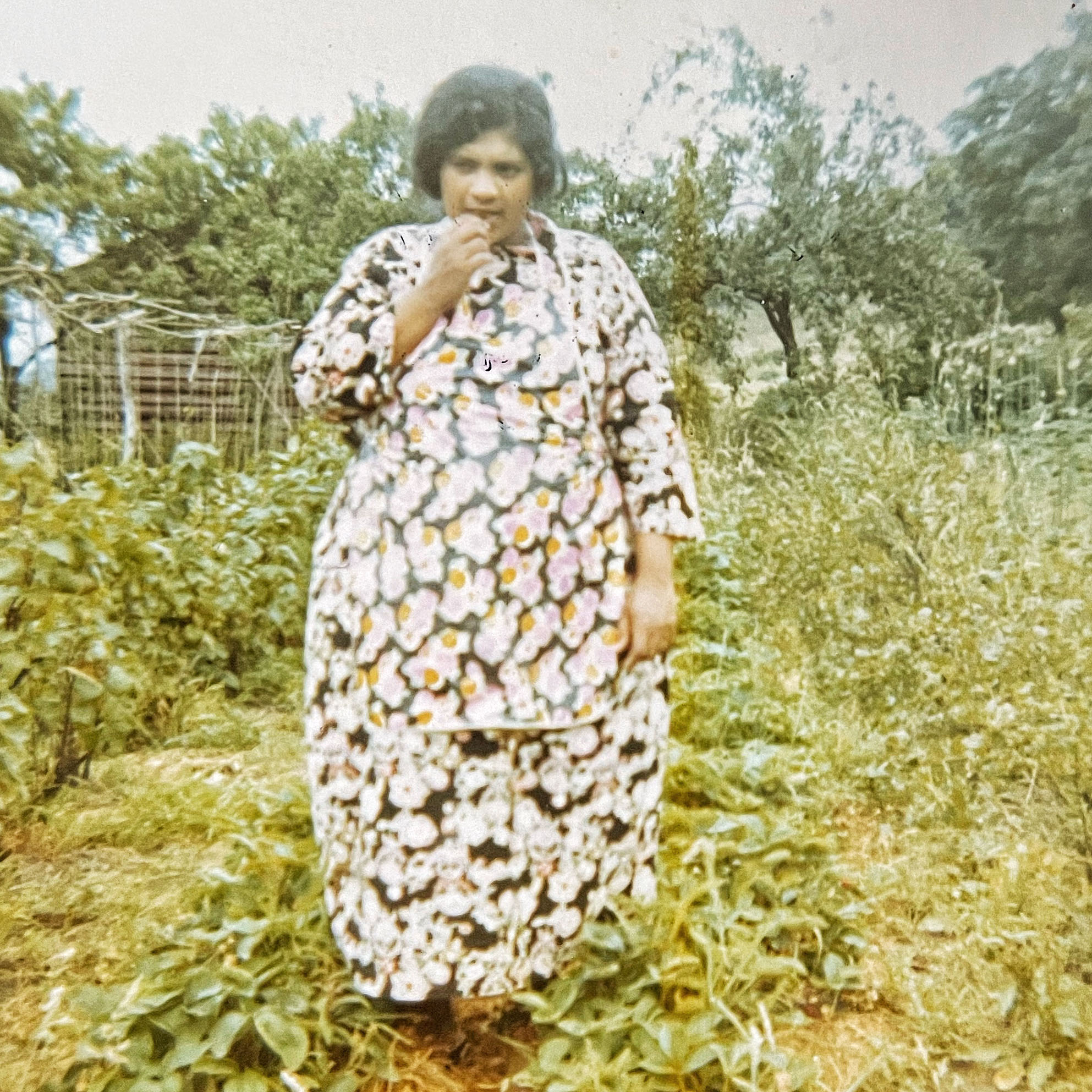 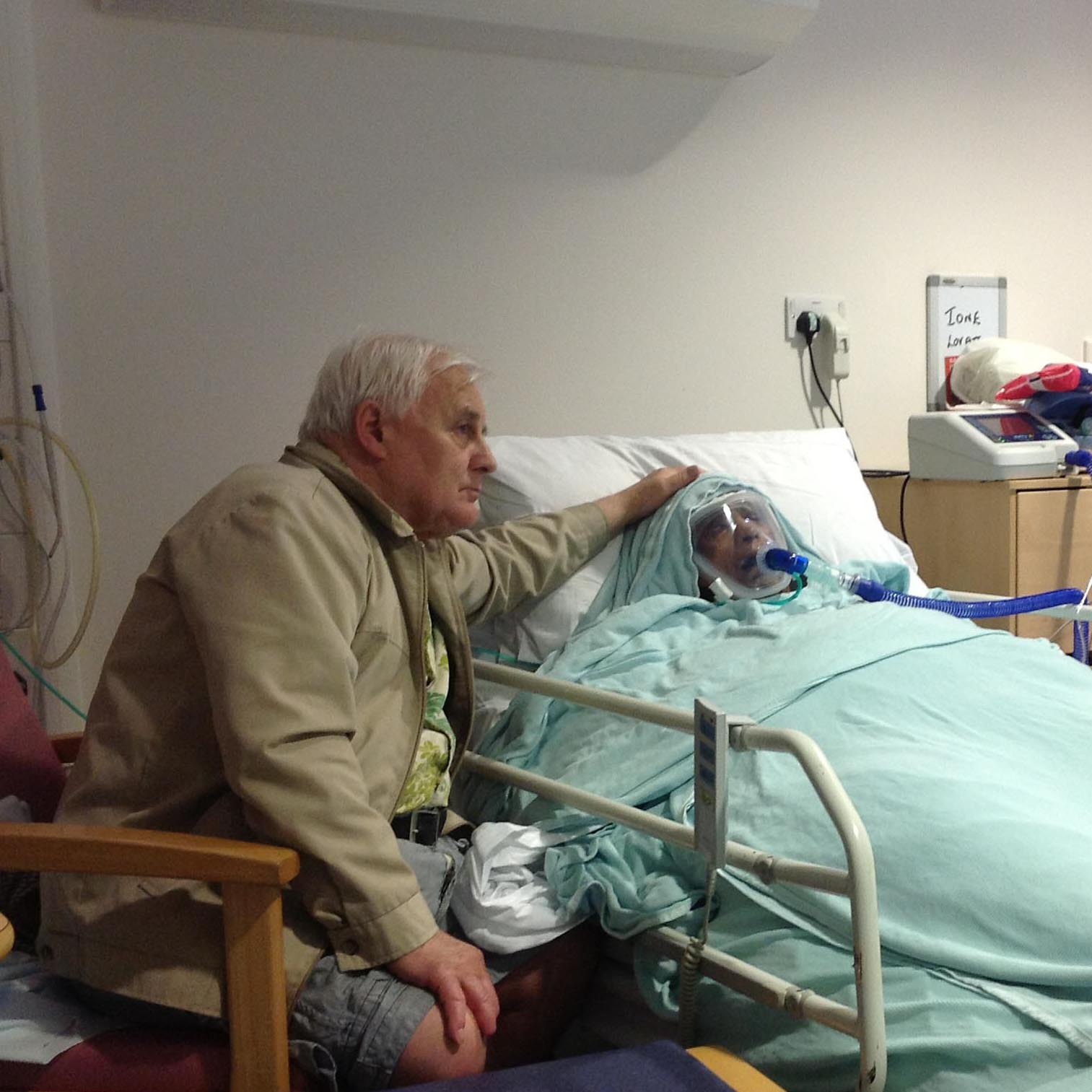 My mother Ione wasn’t an easy person, but then her life wasn’t easy. The decisions we make guide our lives. Mum decided to leave Ceylon in 1966 at the age of 28 coming to Stoke-on-Trent to study ceramics. She met my father, fell pregnant and had to get married. The trip to England was never meant to be one-way but that is what it became. I was born in 1971. Over the years mum struggled with her weight which led to many health complications and increasing isolation as she became more and more confined to our home. From 1981 she rarely left the house. In 2000 she suffered several massive strokes in quick succession and never walked again. Mum died in 2013. However, this is not the whole story. Mum was passionate, creative, she helped people, gave to charity, supported her husband, loved her daughter and kept order. Though she could reduce me to tears with a few words, I always knew she did it out of love and that she cared. There is so much I do not know, so many blank spaces, so much regret, but she is a part of me and deserves to be remembered.

My mother was born on 28 June 1939 and lived a privileged life in Colombo, Ceylon growing up with her parents and four siblings. In this tropical paradise she took art classes and joined societies, worked on art commissions, and made cakes for friends and family remaining in the family home until the age of 29. I really don’t know much about this time and so chose to create an image that represented the richness and vibrancy of the place rather than of a particular house or person. 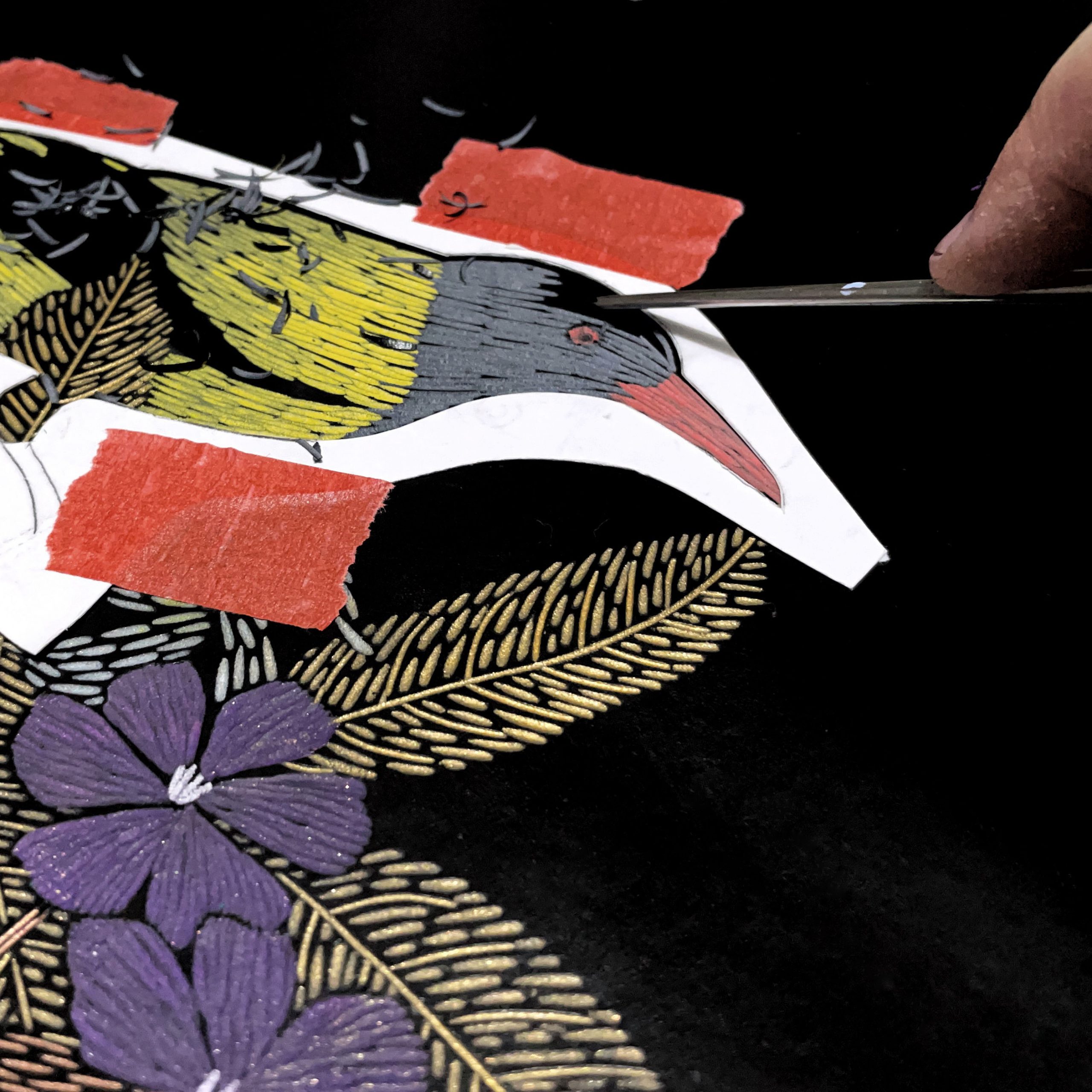 The ‘Fairsea’ departed Colombo, Ceylon August 2, arriving Southampton, England August 21. This was never meant to be a one-way trip. Due to later circumstances my mother only made one visit home after that in 1973 to introduce my father and myself to her family. I know this made her sad. 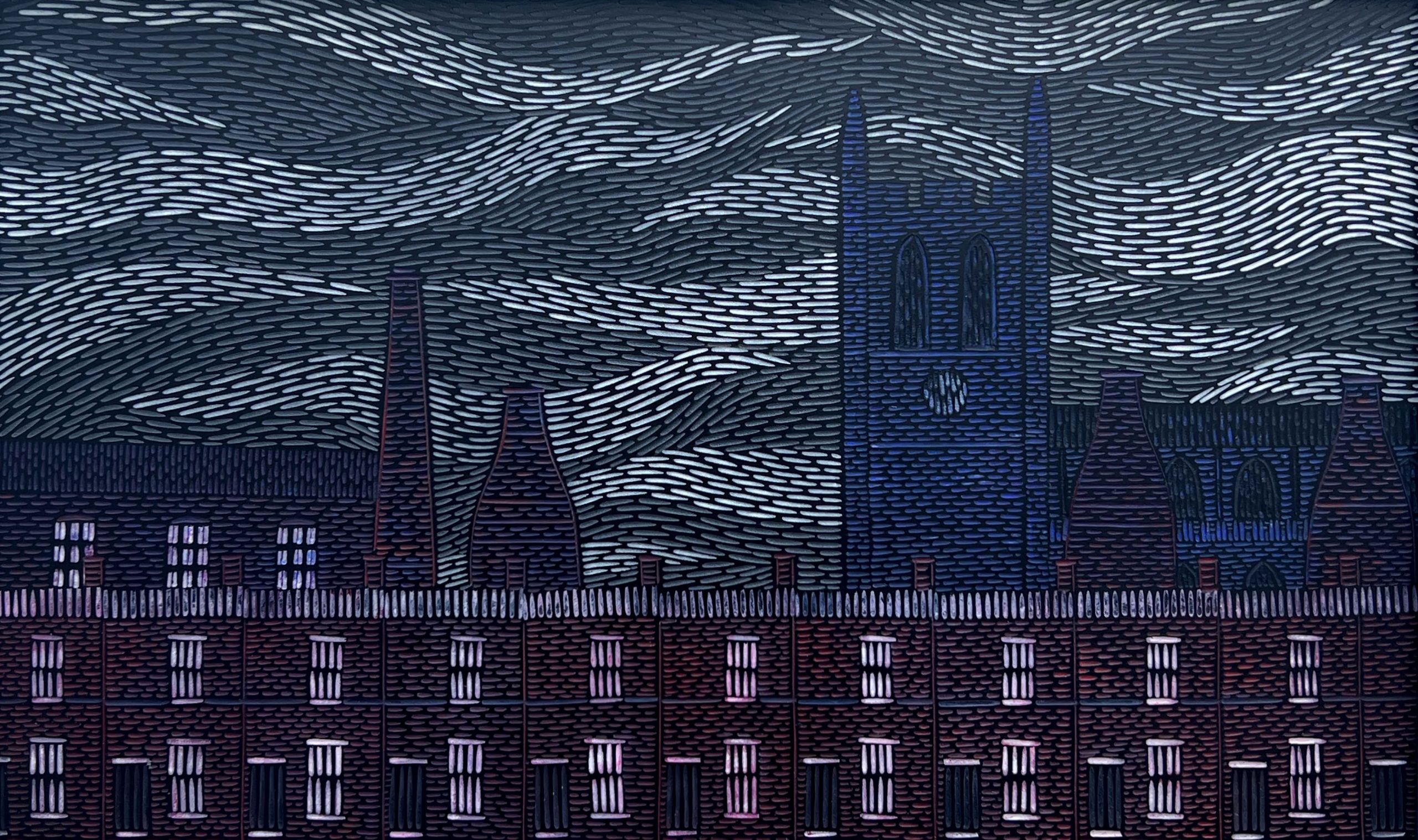 My mother travelled from Ceylon to a very grey Potteries (Stoke-on-Trent) to study ceramics. It was a very different world to the one she had left behind, but she hoped the start of a new exciting journey. I can’t imagine how different the world became to her. In the end she never really left The Potteries as it became her permanent residence, but after the early years she saw little outside of her home and hospitals. 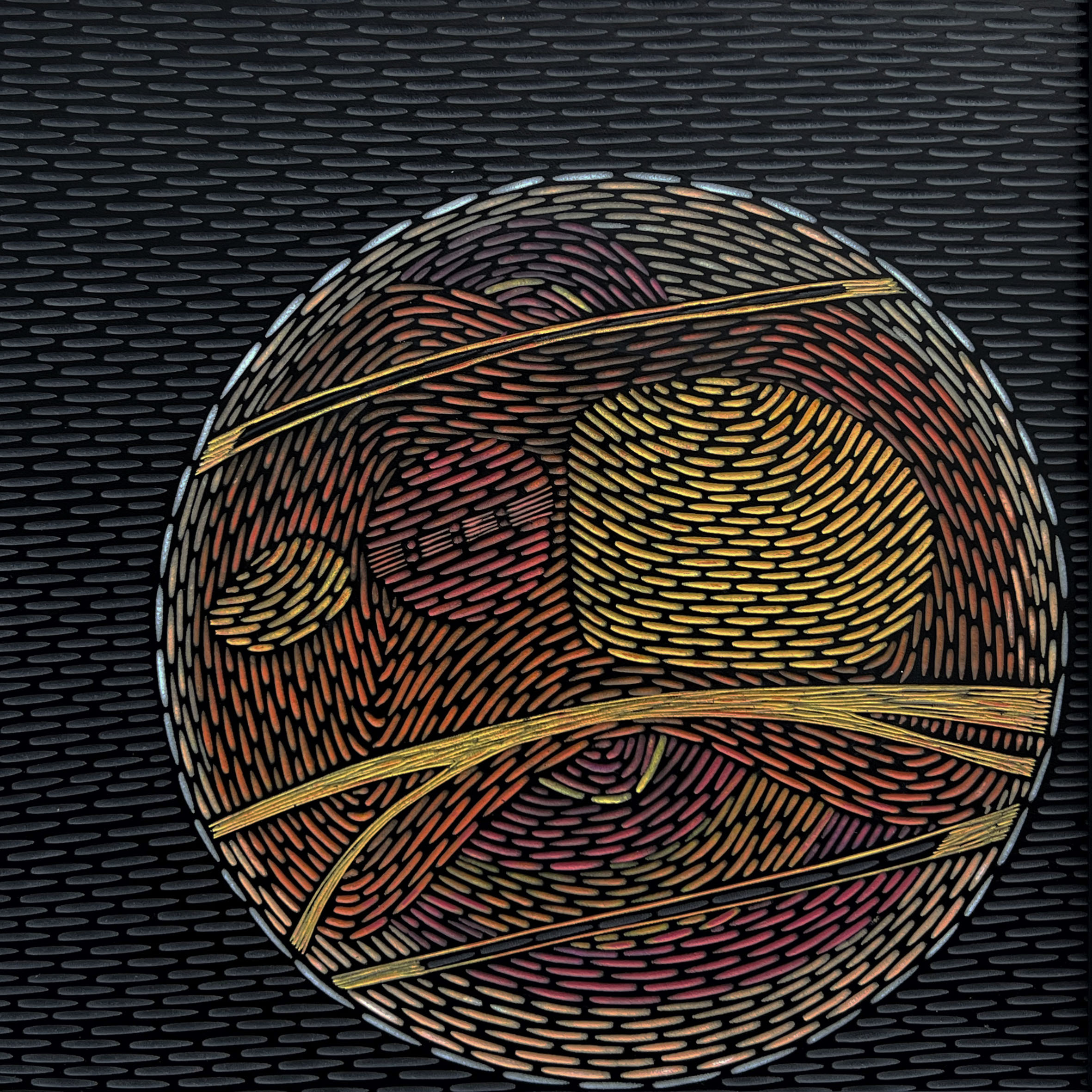 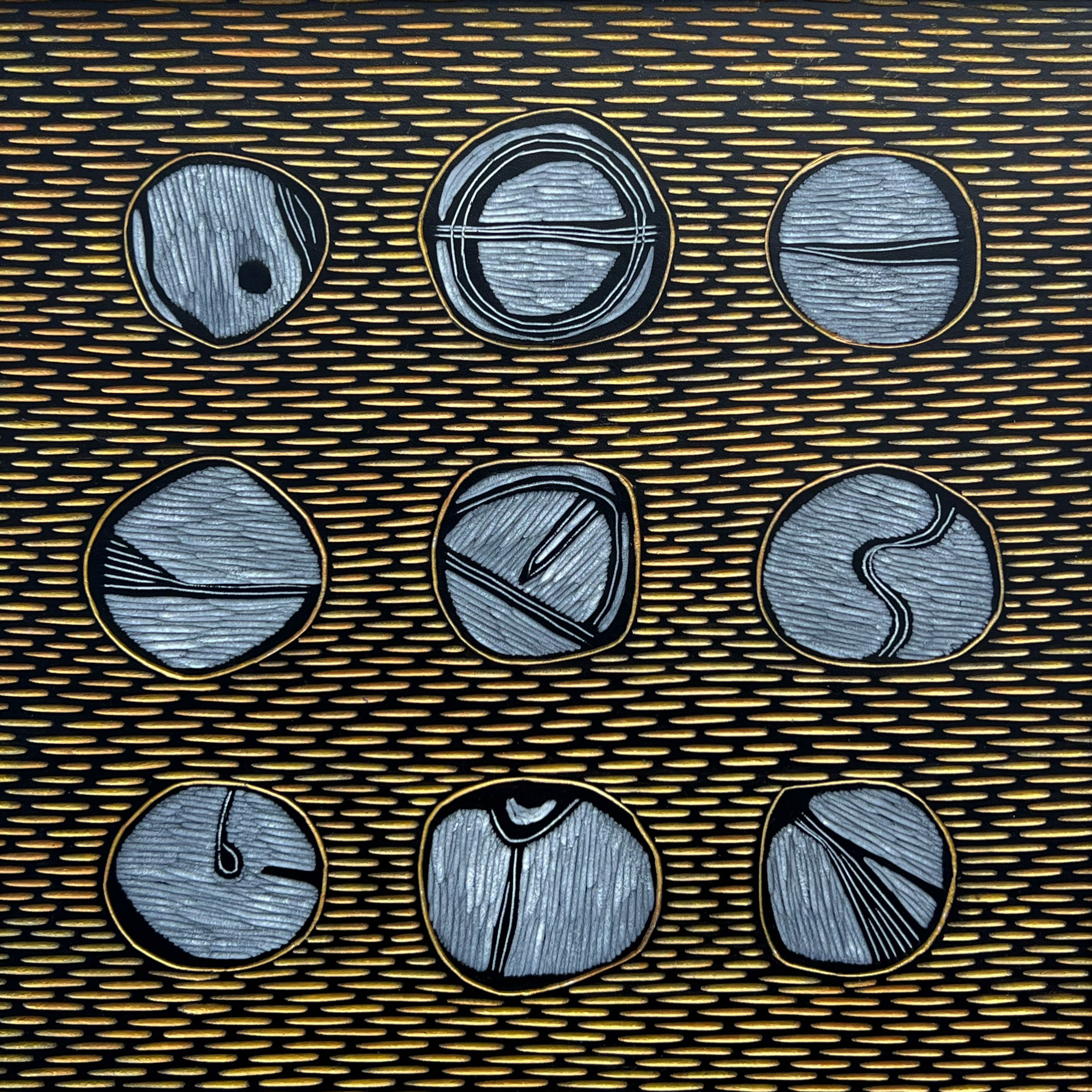 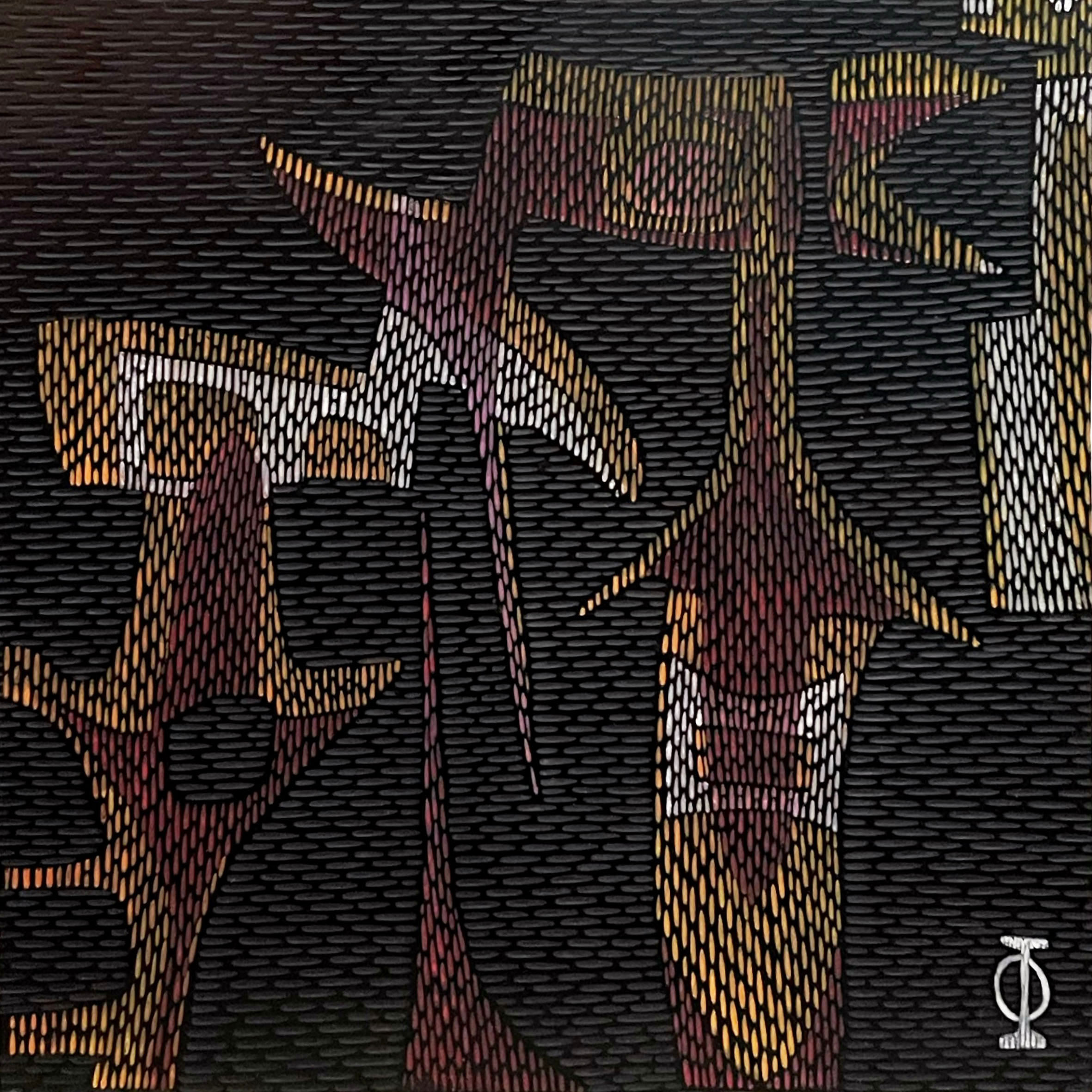 My mother’s time at college were years of discovery, creativity and promise as my mother sought to develop her ceramics practice.The first piece is based on one of her ceramic plates, the second a series of her small incised vessels and the third is taken from one of her batik hangings. Thinking about how someone leaves their mark – I find it’s important that my mother left a very indelible mark on her ceramics and textiles with her maker’s mark – the ‘I’ and the ‘O’ that can be seen in the third image taken from one of her batik hangings.

My mother got pregnant out of wedlock and the initial shame for her family meant that they asked her to hide her pregnancy from friends at home, though they quite quickly reversed this edict. Marriage was the only answer. She never made any ceramics again. She always seemed to regret having to marry,  but when I discovered a cache of photographs that I had not seen before of my parents’ wedding she did look happy and I was struck by how many photographs included the ubiquitous confetti throwing scene – the beginning of a new life. 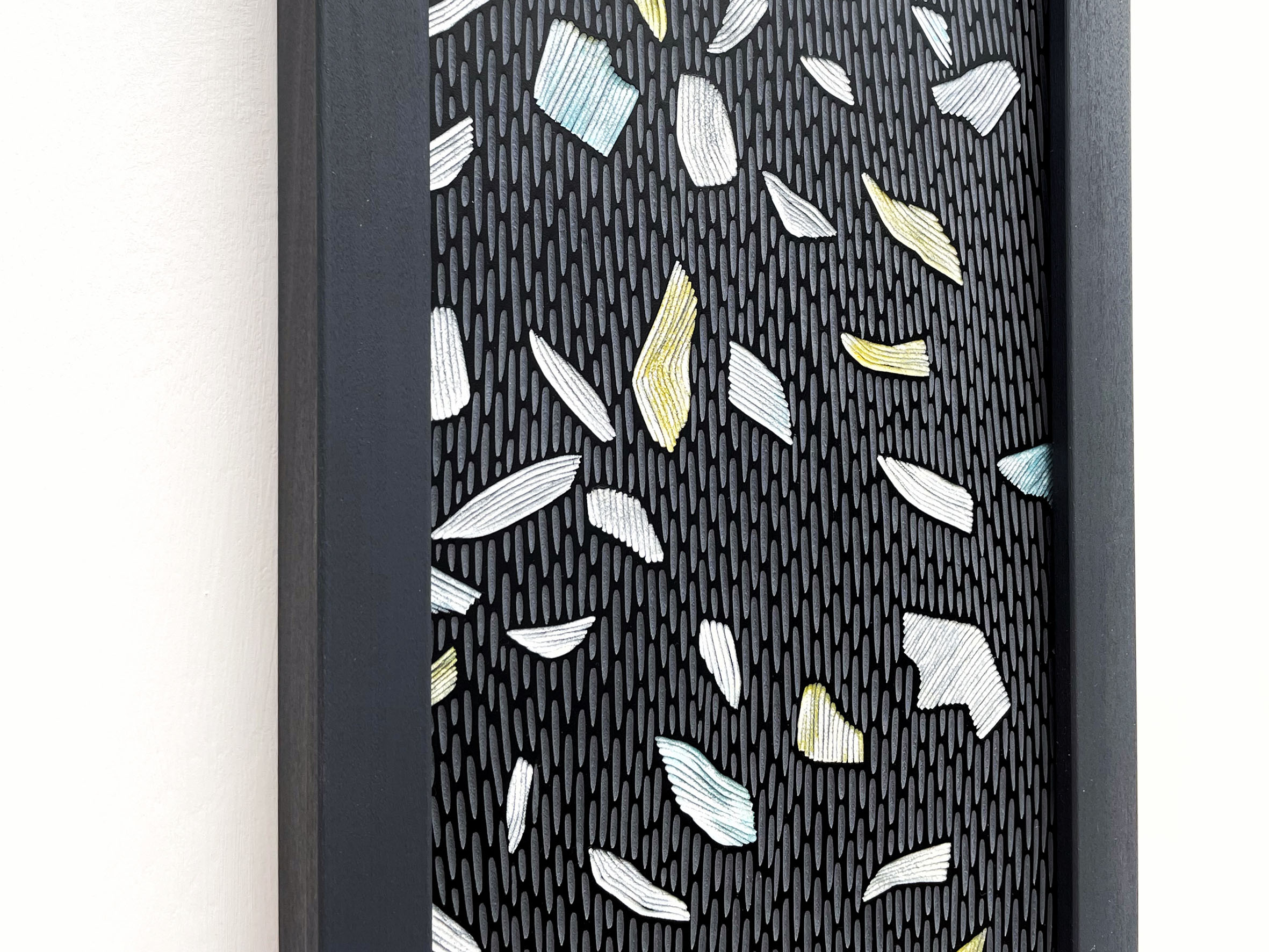 My mother was an excellent cook and seamstress, making most of my clothes until I was in my early teens. She was most definitely the head of our household, holder of the purse strings, with my father deferring to her in everything. For this piece I used my mother’s apron as the blueprint. This apron, which still hangs from a hook in my house was made by my mother over fifty years ago. She wore it most days and I wore it until it became too worn. I wear an apron all the time – at work and at home. 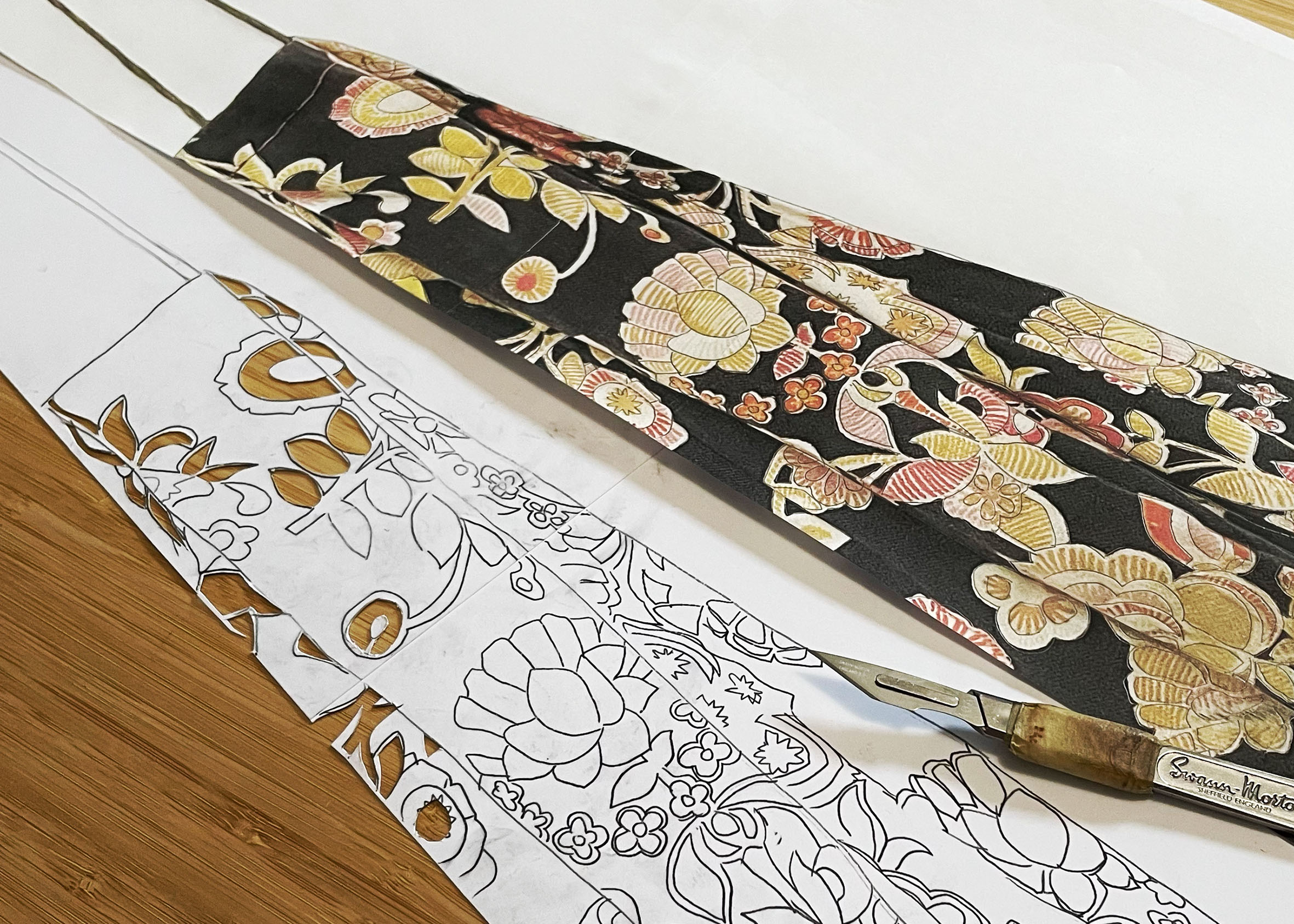 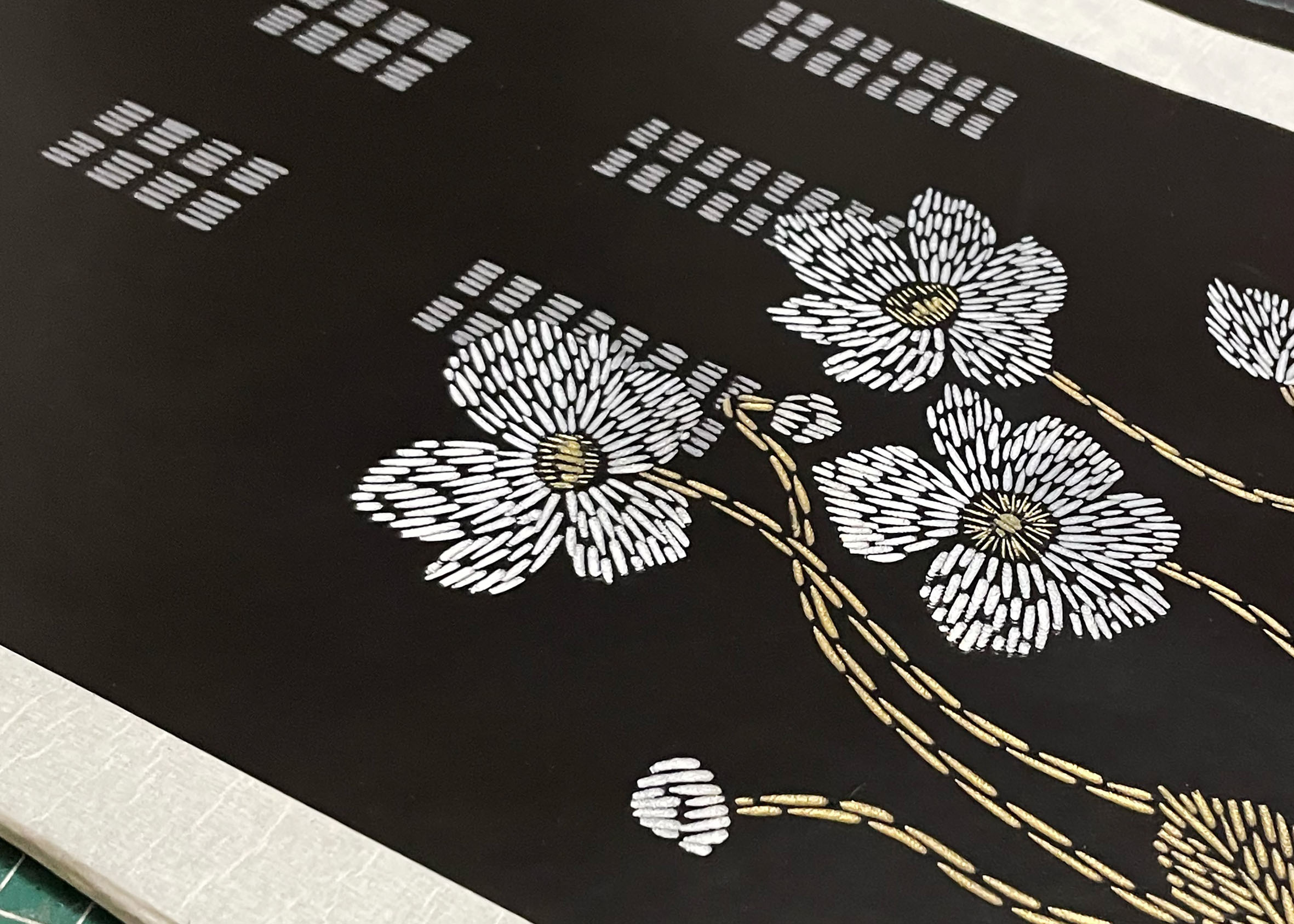 Weight gain, arthritis and generally poor health all led to my mother suffering from agoraphobia. I only remember a handful of times when she came out with me after I was ten, except to hospital. She attended no prize evenings, no degree ceremonies, no concerts, no holidays, but she was still the head of our household and organised our lives with precision. This panel shows my house from the back – my father had the entire ground floor as his studio, we lived on the first and second floors of the house. Increasingly over the years as my mother’s mobility faltered she was stuck on that first floor. She is standing in our upstairs kitchen at the sink looking out on the world. We had several beds of Japanese anemones in our garden. My father would cut their flowers and bring them inside to adorn vases in the house. 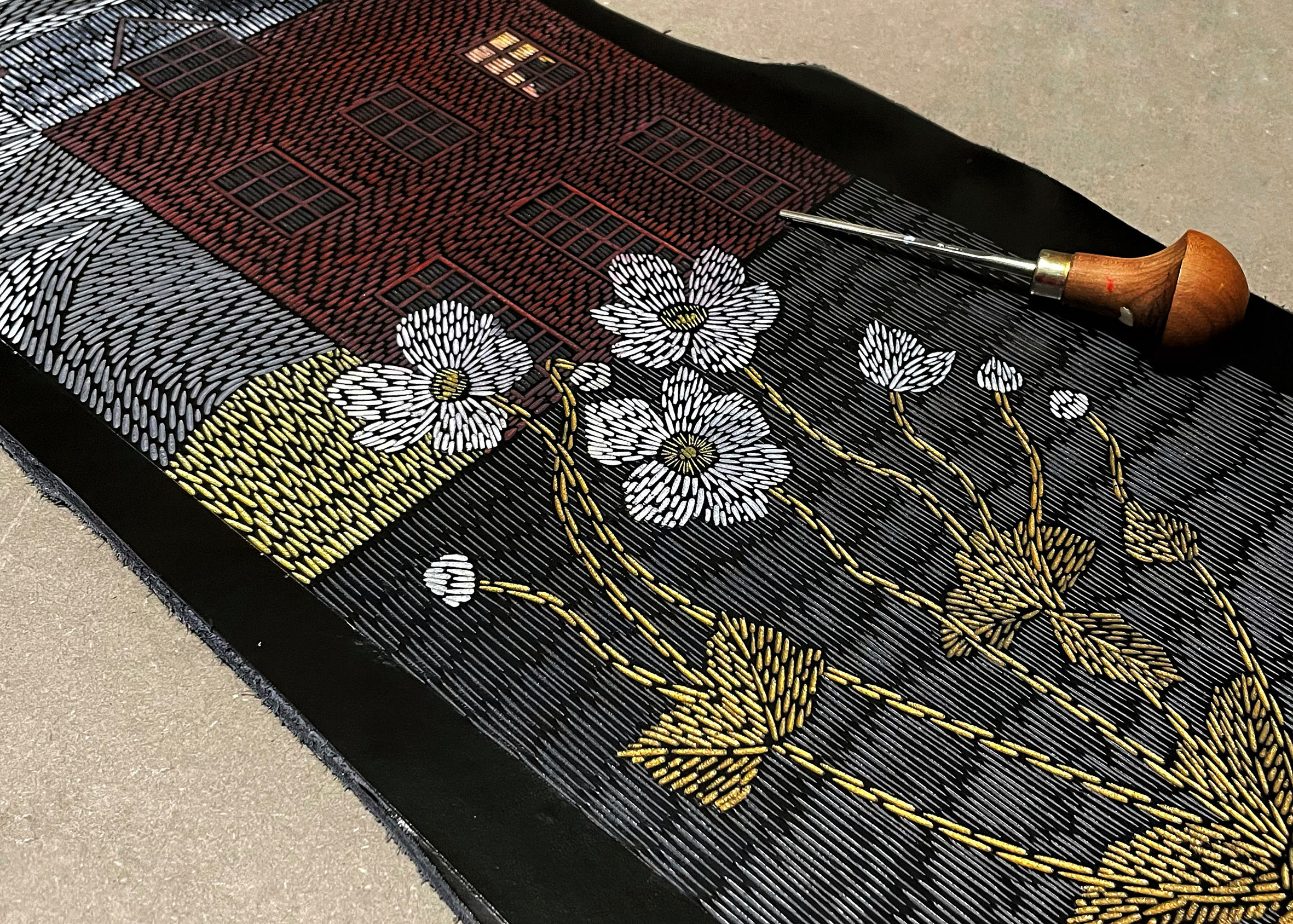 Following a number of massive strokes my mother never walked again, winched from bed to wheelchair and back, attended by carers four times a day. This loss of a dignified life led to increased depression and despair as the years progressed with less and less time out of bed. This is the view from her bed at home. After I left home my parents moved their bedroom to the ground floor looking out over the street. There were lots of bushes outside the window so my mother couldn’t actually see people passing by, just lots of leaves. She still ran the house from that bed and was very controlling, but I think someone whose mind is still good and is stuck for thirteen years in this position has to be. 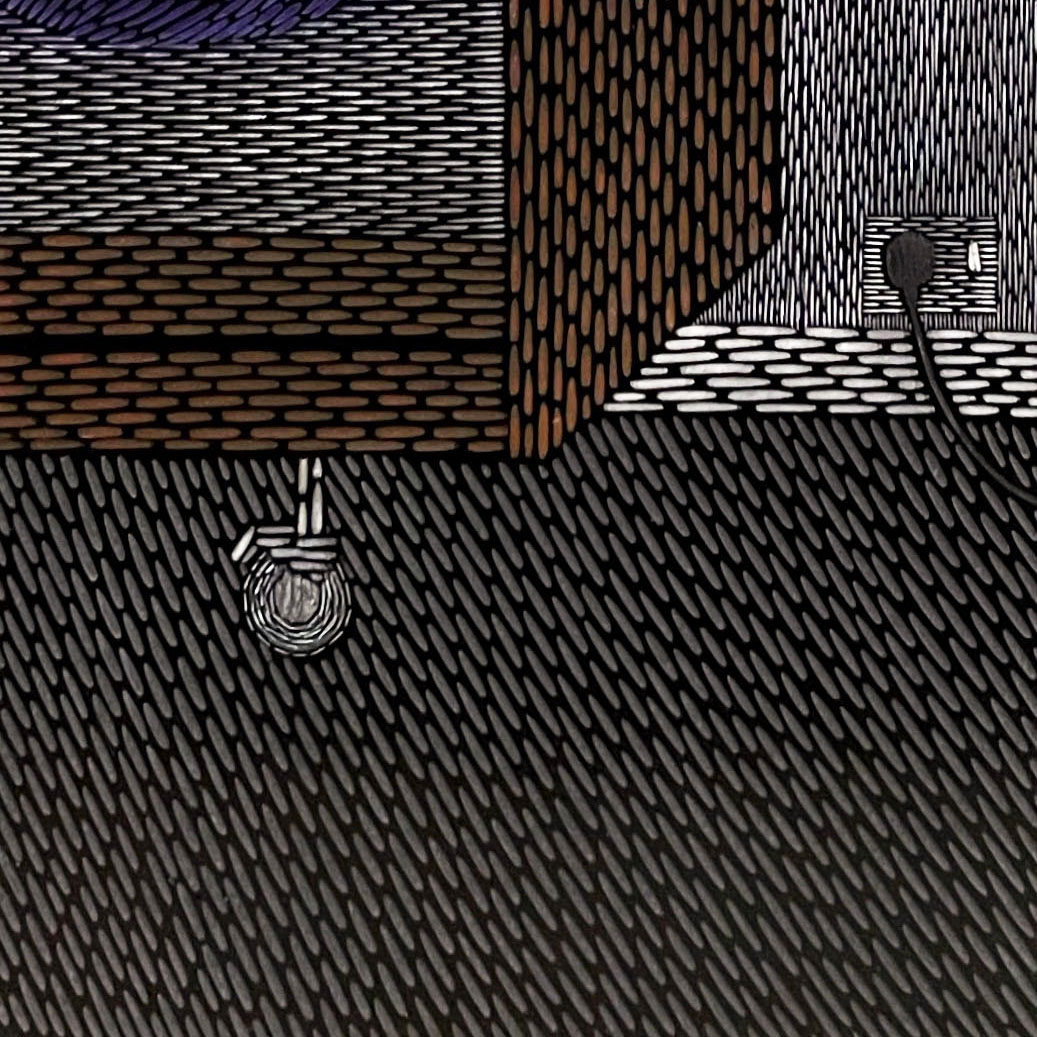 Details are important to me, they are the minutiae of everyday life and in a life so static and reduced as my mum’s was in the last years, a wheel that would allow the bed to be moved and a socket that plugged in the TV that she watched were equally important factors in her life. 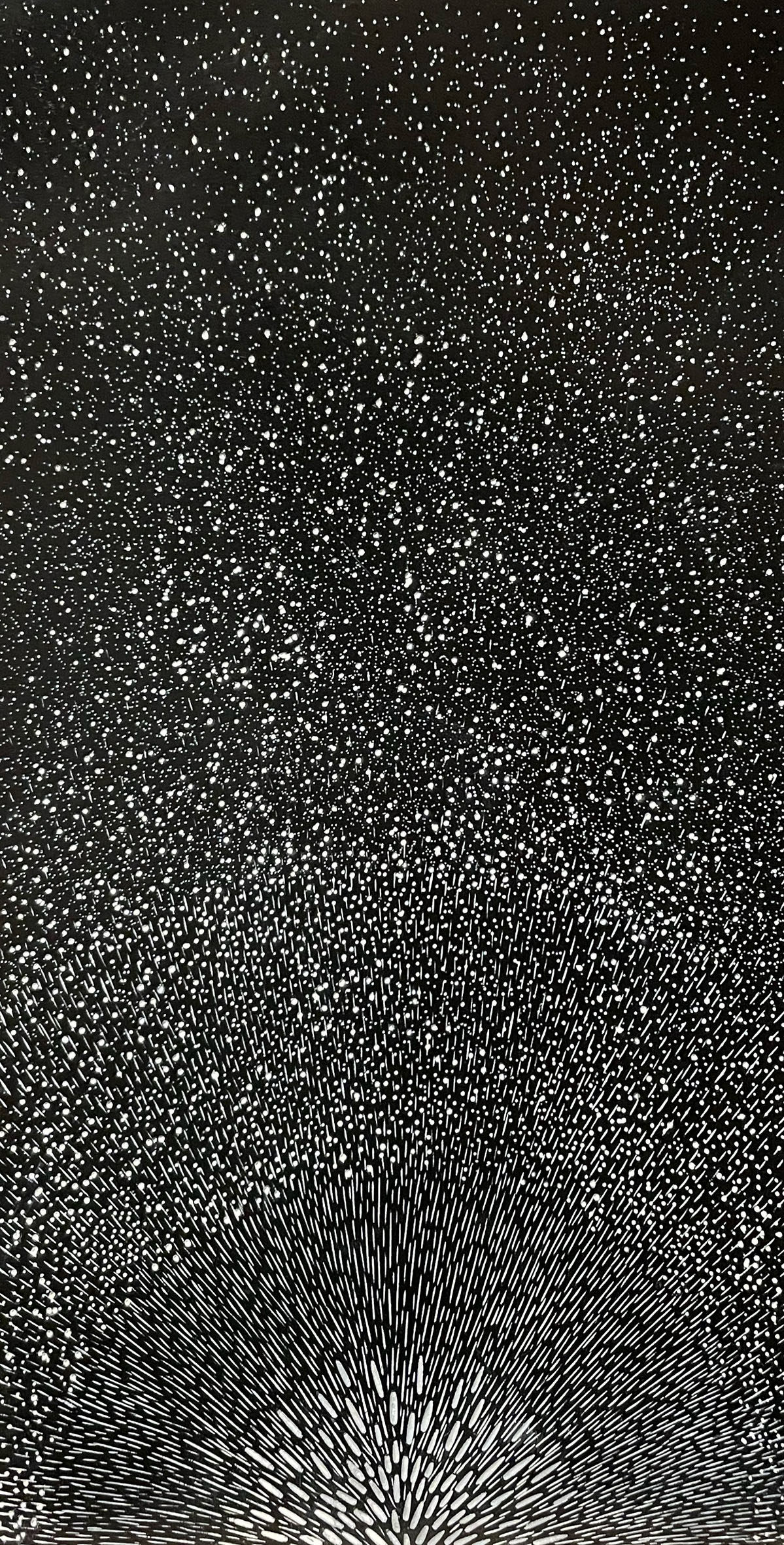 After too many last calls to count, my mother finally died of sepsis in a cubicle in A&E on 30 March 2013 a few days after being discharged from the same hospital – my father was holding her hand. I’m not religious so I don’t believe in life after death or passing to a better place, but I do see how all we are continues to exist in tiny ways in the many, many lives that we touch directly and indirectly ad infinitum and in that way we may pass through people’s lives until the end of time – that is our silent legacy. 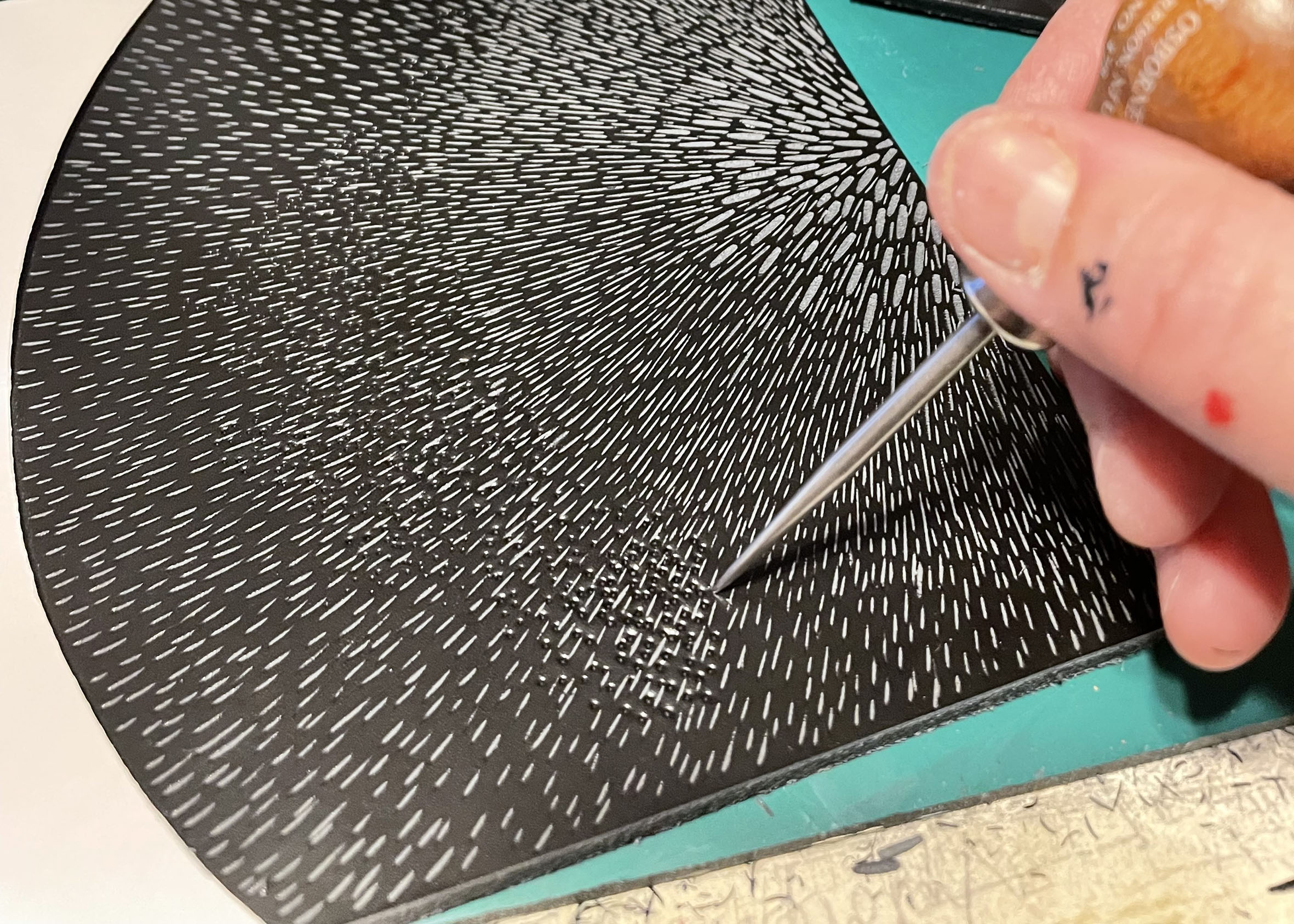 This was the last piece I made for the collection, it was one of the most abstract and freest of the pieces. It took a lot of time and concentration and gave me some time to reflect on life and it’s legacy in a way that the other pieces did not. It was a fitting end to this leg of the project.

You have Successfully Subscribed!